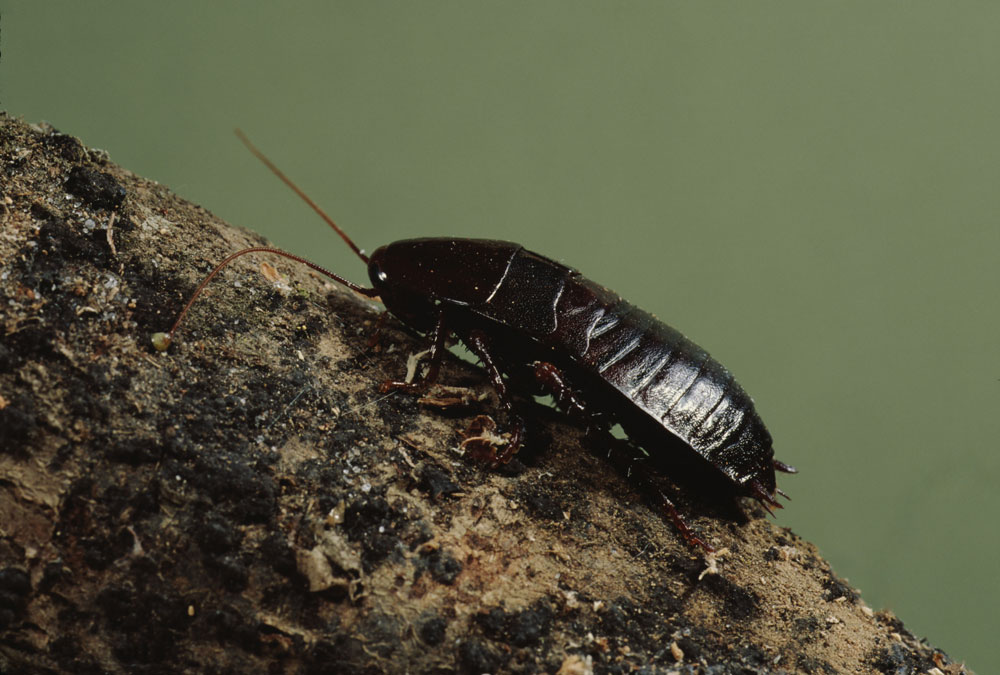 The Oriental cockroach, despite its name, is believed to have originated in North Africa in areas with summer heat and moderate winters. In Great Britain, it is known as the “black beetle” or “common roach,” and is the most important cockroach pest. In the United States, however, it is less common than the German cockroach, and is often referred to as a “waterbug.”

This roach species is easily identified. It is uniformly dark brown to black in color and about 1 1/4 inches in length. The wings of the male cover about two thirds of the abdomen and females have characteristic short wing pads. Oriental roaches are slower moving and less wary than other domestic species. The egg capsule is more than 1/4 inch long and is not symmetrical. The capsule has no subsegments to indicate egg position and lacks lateral indentations. The first indication of an infestation may be old scattered roach parts on the floor or individual roaches caught in spider webs.

The Oriental cockroach is one of several species in the U.S. which can cause serious problems in buildings. It is more closely associated with filth and cool, dark, damp areas than any other roach species. It is most often found in basements, crawl spaces, utility rooms, sewers and old incinerators used for trash chutes. This species fares better outdoors than most and can be found under debris, leaf litter, mulch and dense vegetation near a house, and in water meter vaults.

The Oriental cockroach is long-lived; the entire life cycle is about 22 months. The egg capsule contains 12 to 16 eggs. After hatching, the nymphs develop into adults after several instars over a period of 17 months. The adults live 1 to 4 months., and during that time, each female deposits an average of 12 capsules producing approximately 196 offspring.

Reducing humidity and increasing light and air circulation in problem areas will help control infestations. Removing food, trash and debris will help reduce harborage in nesting areas. Floor drain and condensation line traps should be full of water to prevent migration from the sewer. Abandoned drain lines should be capped. Loose bait formulated for damp areas can provide effective control in basements and crawl spaces.