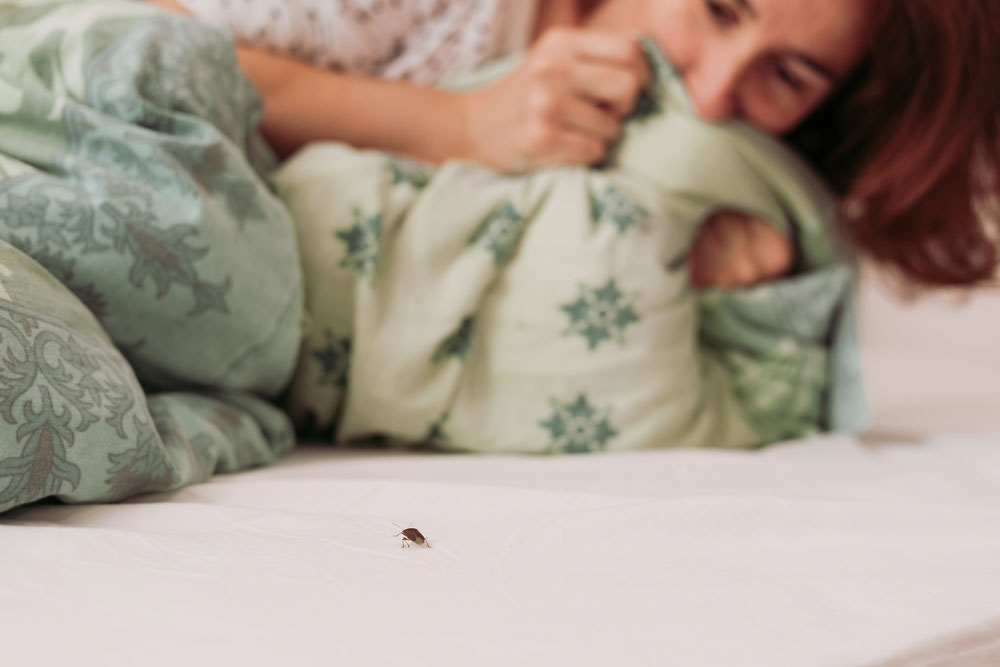 Imagine…you’re sound asleep in a soft, snuggly bed. In the middle of the night, you’re awakened by an itch that needs to be scratched…like something is crawling on you. You sit up, turn on the light and immediately spot them…BED BUGS… they’re everywhere, even on you! Your nightmare just became a reality.

This doesn’t just happen in underdeveloped nations. This is a reality for an increasing number of Americans. If you have ever experienced bed bugs, you may be embarrassed and frustrated, but it’s not your fault. Bed bugs can appear in anyone’s home – even the White House.

After bed bugs are brought into your home, they survive by feeding on any warm-blooded animal. This includes your kids, your pets and you. Bed bugs are more active at night when you’re sleeping and unable to defend yourself. The thought of this makes your skin crawl, and now you have a clear understanding of the old saying, “Sleep tight. Don’t let the bed bugs bite!”

What are Bed Bugs?

Bed bugs are small, wingless insects that feed solely upon the blood of warm-blooded animals. Bed bugs and their relatives have evolved as nest parasites. Certain kinds inhabit bird nests and bat roosts and await the return of their hosts; others have adapted well to living in the “nests” (homes) of humans. Hatchling bed bugs are about the size of a poppy seed and adults are about 1/4 inch in length. Looking from above they are oval in shape, but are flattened from top to bottom when viewing them from the side. Their color ranges from nearly white (just after molting) or a light tan to a deep brown or burnt orange. The host’s blood may appear as a dark red or black mass within the bug’s body. Because they never develop wings, bed bugs cannot fly. When disturbed, bed bugs actively seek shelter in dark cracks and crevices.

What Do Bed Bugs Do?

Bed Bugs seek out people and animals, generally at night while they’re asleep, and painlessly sip a few drops of blood. Bed bugs prefer the dark. While feeding, they inject a tiny amount of saliva into the skin. Repeated exposures to bed bug bites during a period of several weeks or more causes people to become sensitized to the saliva of these bugs; additional bites may then result in mild to intense allergic responses.

Female bed bugs lay about 200 to 500 eggs in their lifetime. They glue their eggs in the cracks and crevices in the harborage areas. Under ideal conditions, eggs hatch about every seven days and the nymphs molt five times, taking a blood meal between each molt. It takes about 50 days for them to become adults.

How Do Bed Bugs Get In Your Home?

Because bed bugs hide in small crevices, they may accompany luggage, furniture, clothing, pillows, boxes, and other such objects as stowaways when moved between apartments, homes and hotels. Used furniture, particularly bed frames and mattresses, are at the greatest risk of harboring bed bugs and their eggs. Thus, you should carefully scrutinize and consider the history of any used furniture, particularly “street” items so plentiful at the beginning and end of each academic year. Because they can survive for many months without feeding, bed bugs may already be present in apparently vacant and clean apartments. Bed bugs can wander between adjoining apartments through voids in walls and holes though which wires and pipes pass.

Can Bed Bugs Harm Me or My Family?

Despite the fact that the bed bug can acquire many human disease organisms during feeding, there have been no documented cases of disease transmission as a result of bed bug bites. However, their bites can produce irritating, itching and burning sensations. Bed bugs feed rapidly, becoming engorged in less than ten minutes. A colorless wheal or lump develops at the bite location; in contrast, flea bites have reddish centers. Discomfort from bed bug bites may last a week or more. Occasional bites indicate a beginning light infestation of adults; many bites result from a heavy, long-standing population of nymphs and adults.