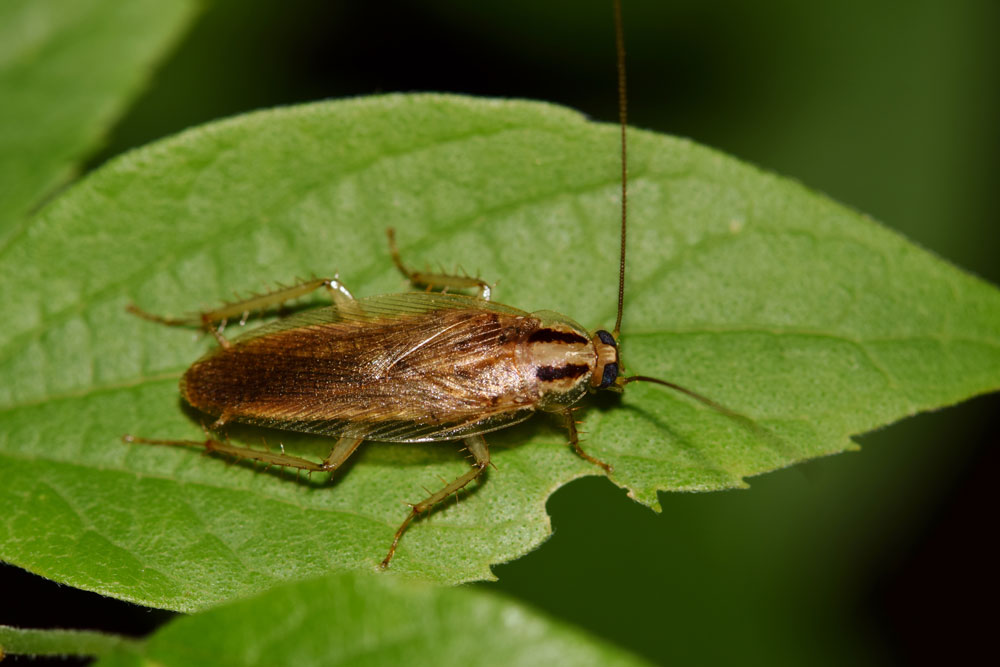 Adult German cockroaches are 1/2 to 5/8 inch in length, pale brown or tan in color, with two parallel black streaks on the pronotum (the shield-like segment behind the head). The adult males are somewhat narrower than the females. German cockroach nymphs, 1/8 inch in length when they hatch, are almost uniformly dark, except for a light area on the back of the second and third segments. As they grow, this light area becomes larger, until as mature nymphs they have two parallel black streaks separated by a light tan area.

The German cockroach is the most common household insect found in the United States. This pest is usually found infesting kitchens and bathrooms, but it has the capability of living in any portion of any heated structure. It is usually found in dark, secluded harborage areas such as under cupboards, behind cabinets, in wall voids or around appliance motor housings.

The adult female produces four to eight camel-brown egg capsules in its lifetime. Each capsule is about 5/16 inch in length and contains 30 to 40 eggs. The female carries the egg capsule partially within it’s abdomen until just before the nymphs are ready to emerge. If the egg capsule is dropped prematurely, the developing cockroaches will die of dehydration. The nymphs emerge from the egg capsule in 28 to 30 days, and they feed and live in the same areas as the adults. Nymphs molt six to seven times before becoming adults. There are three to four generations per year, with each generation averaging 130 days.

Cockroaches feed on all types of food and practically anything else with nutritional value found within a home or commercial building. German cockroaches are nighttime insects and remain hidden in dark, secluded harborage areas during the day. If they are seen during daylight, it is a sure sign that a tremendous population exists. Cockroaches prefer to congregate together in their harborages, but if the population becomes too large, they will be forced to move out of the safest hiding spots.

Sanitation is the cornerstone of effective, long-lasting German cockroach control. Food material must be eliminated as much as possible and harborage areas should be sealed off where possible. Baiting, in conjunction with a growth regulator, is the most effective method for fast, total control. Place numerous small bait points, in hidden areas, around the infested room. Cockroaches will feed on the bait and then pass it on to other members of the colony so total control is achieved quickly. A growth regulator will deform the nymph stage so it will not have the ability to reproduce as an adult.

For more information on German cockroaches, suggested products, and treatment instructions, be sure to visit your nearest Pestop location.