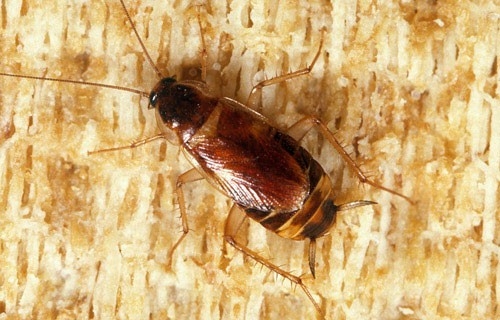 Although cockroaches have been around since the Paleozoic Era (which began 600 million years ago and lasted for 375 million years), the brown-banded cockroach did not come to the United States until about 1903. It is of African origin, and even though introduced first in Florida, it is now well known throughout many northern states. It is also known as the spotted roach or the tropical roach. Of the four species that are widespread throughout the world, the brown-banded is considered a small roach, reaching a length of about one-half inch. The favorite spot for the brown-banded roach is an “up” location: behind mirrors, pictures, drapes and in such hot spots as the inside of television sets, radios and even wall clocks. It is not necessarily a “basement” roach. Heights are no deterrent for this roach, which has the habit of standing erect on its legs while searching for food. Although called brown-banded, it may vary in color from black to light gold. Two yellow bands are found on the wings of the adult, one near where the wing joins the body, the other about 1/16-inch further back toward the wing tips. The “brown-banded” name is actually more appropriate for the nymphs than for the adults since the bands are more noticeable at that stage.

The brown-banded roach’s egg capsule is only 3/16 inch long and is yellowish or reddish-brown in color. It can be found in as many places as the female can reach and has been fastened on ceilings and walls. The female carries the capsule for about one day before attaching it to some object, and will carry about 14 of these capsules during her life. Each capsule contains about 18 eggs, with about 13 young emerging per capsule after a two-month incubation period. All development stages of the brown-banded roach are retarded when the temperature drops below 75 degrees, and the roach prefers temperatures above 80 degrees. Length of the nymph stage from hatch to adult will average about 160 days. The maximum adult female life is 200 days. Some studies have indicated the brown-banded roach is very gregarious and will live harmoniously with other roaches, although the brown-banded roach has been observed to fly readily when disturbed.

Sanitation is a must for non-chemical control of roaches to be effective. Because the roach is a nocturnal creature, foodstuffs left out overnight, even crumbs, are an invitation. Because the brown-banded roach likes heat rather than moisture, elimination of certain wet areas that reduce other roach populations may not work for the brown-banded roach. Baiting, in conjunction with a growth regulator, is the most effective method for fast, total elimination. Place numerous small bait points in hidden areas around the infested room. Cockroaches will feed on the bait and then pass it on to other members of the colony so total control is achieved quickly. Also use a growth regulator. This will deform the nymph stage so as an adult they are unable to reproduce.

For more information on brown-banded cockroaches, suggested products, and treatment instructions, come visit us at your nearest Pestop location.